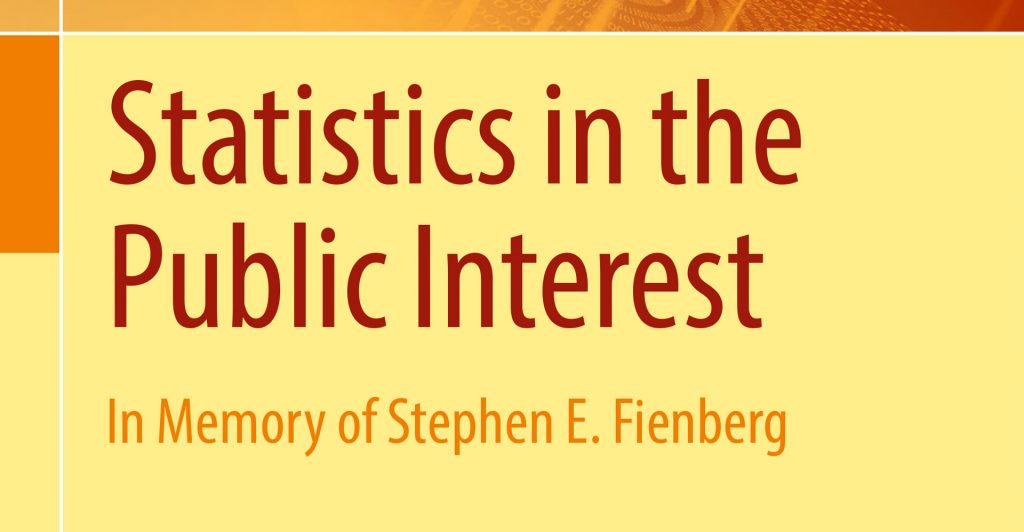 Several Center for Statistics and Applications in Forensic Evidence (CSAFE) researchers contributed to a new book that honors the legacy of the late statistician Stephen E. Fienberg.

“Statistics in the Public Interest: In Memory of Stephen E. Fienberg” covers various topics in statistics and the social sciences, exploring the fields in which Fienberg made significant contributions.

Fienberg developed statistical methods that united the influences of data and statistical theory to improve science and public policy. He dedicated his career to applying statistics to prominent societal problems for deeper understanding and affecting change. His work resonated with many, and he was — and still is — known as a pioneering statistician across the globe.

The book features 28 invited papers from a wide range of authors and is organized into six sections: Theory and Methods for Categorical Data, Bayesian Theory and Applications, Statistics and the Law, Causal Analyses, Surveys, and Censuses and Official Statistics.

Each section provides an overview of Fienberg’s contributions and continues with chapters by Fienberg’s students, colleagues and collaborators exploring recent advances and the current state of research on the topic.

In this book, Fienberg’s wife of over 50 years, Joyce Libman Fienberg, is also remembered. A seventh section, “Steve and Joyce as We Knew Them,” includes short entries from their close friends, former students, colleagues, and others, as well as a collection of photographs.

Along with Carriquiry and Eddy, the following CSAFE researchers contributed to the book:

Fienberg was instrumental in forming CSAFE and setting its strategic direction. He focused his research on the forensic sciences for more than 40 years, and he wrote extensively on the use of statistics in civil and criminal legal proceedings. His research interests and experiences made him the ideal co-founder for CSAFE, which he helped spearhead in 2015 and served as co-director until his passing in 2016.

Carriquiry wrote about Fienberg’s contributions to CSAFE in an obituary published for the ISBA Bulletin in December 2016 and reprinted in the book:

I have had the privilege of calling Steve a friend for over 25 years, and his mentoring and efforts on my behalf changed the course of my professional life. A few years ago, Steve encouraged me (and Hal Stern and Karen Kafadar) to submit a proposal to establish a NIST Center of Excellence in Forensic Statistics, which would be located at our four institutions, with “headquarters” at Iowa State. Surprisingly to me (but not to Steve!), we were successful and obtained the funds to create the center in 2015. Steve was the intellectual leader, the one with the grand vision and the far-reaching ideas, and I have great hopes that the work on which we have embarked at the center will have a positive impact on society, because Steve was instrumental in setting us off on the right path.