3D imaging technology is providing a one of a kind immersive experience for video game users and movie goers, from the infamous fighting action in Call of Duty to the alien world of Avatar.

As 3D technology continues to evolve, its influence is now extending beyond Xbox in the consumer world into critical professional applications such as forensic science shoeprint examination. Center for Statistics and Applications in Forensic Evidence (CSAFE) researcher from University of California, Irvine Dr. Charless Fowlkes said, “There’s really very little technological barrier to this being used in forensic science.”

CSAFE research is at the forefront of the 3D technology movement.  Fowlkes and his team have developed a prototype of a low-cost, portable 3D scanner device, a new method that will provide forensic examiners with more life-like representations of shoeprints.

Practitioners are faced with the challenge of making a compelling argument that marks seen in the crime scene are unique to a suspect’s shoe.  They must also determine the likelihood of a match between two shoes relative to other possible tread patterns that could have also left behind the print.

The wide diversity of shoes on the market can make this challenging.  In addition, footwear impressions left in mud, sand or blood change the equation. Acquired characteristics such as cuts and scrapes that result from individual wear patterns can also make it harder to tell the real shape of the shoe.

“These properties tend to not be well represented by test impressions,” Fowlkes said. “Every time I step it’s not going to leave exactly the same pattern and so that’s a place where uncertainty can enter into that process.”

Current shoe print documentation techniques for a particular feature of shoe tread involve photographing the shoe tread or test impression and drawing arrows or circles on the photo to indicate the feature referenced.  Examiners then run the photographs through a database in search of similar patterns. This approach can work for some tread elements, but is not very effective at indicating tread wear. This is where CSAFE 3D scanning technology can be beneficial.

“3D scanning provides a much stronger digitized representation of the shoe than the photos and test impressions which are currently used,” Fowlkes said.

The CSAFE scanner uses a pair of cameras to locate a point in 3D. By determining the location of cameras in space and finding the corresponding locations of the point on each image, researchers triangulate the location of the point in 3D. Identifying matching points between the left and right cameras can be challenging so researchers use a LCD projector to project a textured patent onto the surface so that each point has a unique color, making it much easier to match.

Structured illumination is limited by the resolution of the cameras, making it hard to recover very fine details such as the shapes of small cuts in the shoe. To resolve this issue, researchers use a photometric stereo method to illuminate the surface from different directions while recording the pixel brightness, allowing researchers to recover small surface features.

The idea of projecting light on the scene is well known, and can be seen in Xbox video game console accessories that analyze a user’s pose to control the video game such as swinging a tennis racquet.

“3D scanning a suspect’s shoe provides a quantitative way to archive the evidence which an examiner could easily pull up at a later date to re-examine without having physical access to the shoe itself,” Fowlkes said. “3D data will thus provide a scientific basis for modeling the uncertainty in how evidence at a crime scene is generated.”

A current barrier to 3D technology is the lack of large imaging databases, which limits the ability to search for similar patterns.  CSAFE is working to fix this problem. Fowlkes and his team plan to collect physical scans of common shoe brands and explore the interplay of shoe make and model and the various tread variations.

CSAFE research on relating 3D tread shape to crime scene impressions will provide a basis for recommendations on how to incorporate such shape analysis tools into everyday shoeprint examination. For example, perhaps in the future investigators will not only take a suspect’s fingerprints at the time of booking but also 3D scans of whatever shoes they are wearing.

“This would provide a growing dataset of 3D models. In particular, these could be automatically matched against crime scene evidence from existing open cases in order to generate potential leads,” Fowlkes said.

In addition to creating a database of 3D shoeprint models, Fowlkes and his team plan to continue to refine the 3D scanner design, improving its accuracy and imaging capabilities.

“Our development of 3D shoeprint scanning technology has the ability to transform the process of shoeprint database construction and modeling,” he said. “We expect our results to allow for an intuitive, rigorous, and statistically sound basis for expert forensic testimony related to footwear impression evidence.”

Visit the CSAFE Research Page to learn about more new technologies our team is developing. 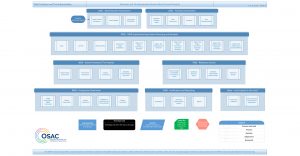